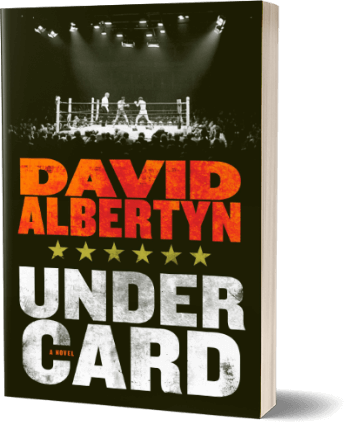 Set over the course of twenty-four exhilarating hours, Undercard is the story of four childhood friends, now in their early thirties, unexpectedly reunited by a high-profile prizefight in a Las Vegas casino . . . and an even higher-profile murder.

When Tyron Shaw returns to his hometown of Las Vegas after eleven years in the Marines, he’s surprised to discover that two of his best friends from childhood are all anyone is talking about: Antoine Deco, three years out of prison, hasn’t lost a boxing match since his release, and tonight is fighting in the undercard to the fight of the decade; and Keenan Quinn, a police officer who killed an unarmed teenager and escaped punishment from the courts, is the subject of a protest tomorrow morning.

Tyron has trouble reconciling either story with his memory of these men, and the situation escalates when he runs into the love of his life, Naomi Wilks, a retired WNBA player, basketball coach, and estranged wife of Keenan. As Tyron reconnects with his old community, he will learn over the next twenty-four hours that much has changed since he left Las Vegas . . . and there is much more that he never understood.

The Reef, an aquarium-themed casino and the hottest resort on the Strip, is the backdrop for this bullet-paced narrative, where loyalty to one’s friends, one’s family, and one’s community are ever at odds, and every choice has deadly repercussions.

Check out this page of discussion questions, perfect for book clubs or readers looking for further insights: The Undercard Reader’s Guide.

Undercard has been nominated for the 2020 Evergreen Award, which is the adult category in the Ontario Library Association’s (OLA) Forest of Reading campaign to encourage a love of reading in people of all ages – there are 10 categories. The Forest of Reading is Canada’s largest recreational reading program, and “all Canadians are invited to participate via their local public library, school library, or individually.”

“If I were to rank my favourite sports from one to 100, boxing would come in at about 512. Two people beating each other to a pulp is so far from my idea of entertainment that I managed to skip seeing Rocky for decades. So when I say that a mystery about boxing and boxers kept me reading intently, you know it has to be better than good. Undercard, a debut novel by Toronto author David Albertyn, is that book… Albertyn is a writer to watch.”

The Globe and Mail

“We’ve never seen a boxing story quite like this one… When a book like Albertyn’s comes along, it reminds you why you fell in love with sport stories in the first place. For those looking for a fun, interesting and well-written book, I recommend Undercard. Though I had initially got the book to read on a train ride from Montreal to Toronto, I found myself coming back to it to revisit how this gripping and surprising story was so expertly told.”

“An absolute knockout! Albertyn’s unforgettable voice transports readers to the underbelly of the Vegas boxing world, the dramatic ending a sucker punch that will leave you breathless. In Undercard, the emotional resonance, well-drawn characters, and seamless prose will keep you reading until well after the final bell. Best debut of the year.”

Bestselling international author of The Freedom Broker and Skyjack

“Fast-paced, fearless, and psychologically astute, Undercard is at once a terrific thriller and a sharp commentary on our turbulent times.”

Author of The Free World and The Betrayers

“A gutsy, intricate thriller as intense as it is clever, Undercard had me reading with the momentum of a house on fire.”

Author of Kit’s Law and The Fortunate Brother

“Gritty, dark, and cinematic, Undercard is as tough as the Nevada desert of its setting. As a diverse cast of characters struggle to find meaning in fractured lives and a fractured world, Albertyn’s taut writing makes the pages fly by. The climax descends like a prizefighter’s knockout punch.”

Author of Magnified World and Be Ready for the Lightning

“One night in Vegas can take a man from the gutter to the top of the world and back down again. In Undercard by David Albertyn, four childhood friends are reunited in the city that keeps the world’s secrets. Fresh from his last combat tour in Iraq, marine captain Tyron returns to Vegas to find his in-and-out-of-jail foster brother, Antoine Deco, is scheduled to fight at the biggest casino in town. Their other former friend, Keenan, an ex-police officer recently acquitted but definitely guilty of shooting an unarmed black man, has become the poster child for police abuse. Keenan’s wife, Naomi, a retired WNBA player, and Tyron’s ex-girlfriend, teeters on the edge of ending her marriage. As the title suggests, Albertyn’s thriller revolves around an undercard fight, and certainly delivers the sights, sounds, and impact of a heavyweight bout in the city of unforgettable nights and regrettable mornings. On a much deeper level, the author skillfully tells the stories of four characters in search of their identities, pushing each to the breaking point of the best and worst night of their lives. With echoes of Sleepers and LA Confidential, Albertyn delivers a hard-hitting thrill ride that takes love, sex, friendship, and loyalty to the mat until someone throws in the towel or walks out a champion. “

Author of Come and Get Me

“I got an early copy of this novel at Thrillerfest…and am so glad I did. Gripping story, vivid prose, satisfying ending. I can’t recommend it enough.”

“A visceral no-holds-barred novel that’s as tight and strong as the bodies that populate it. The book grabs you from the get-go, it’s a compelling, character-driven tough-guy revenge story about life’s disappointments and the self-acceptance of being a bench starter. There are lots of sporting analogies for the failed relationships and scars of the wars of adult life, both figuratively and literally. It’s a gritty and powerful read and the characters will leave you hoping there’s a sequel in the works. This is a true Vegas tale of winner takes all – but do they really?”

“Best Vacation Book Ever! Whenever I have a long flight coming up, I always tend to grab something easy to read, Terry Prachett, something chick-lit-y, or a NYT best seller. This might have been the best one yet! It’s a fast-moving story that tracks just 24 hours of time in Vegas. There’s death, life, love, hard decisions and almost a cinematic drama. I was actually disappointed when my flight was over because I had to put the book down to get off the plane! This was a GREAT read and I highly recommend it!”

“Marvellous, twisty book that moves really quick — I read it in two evenings. It will get you going on one track then surprise you and charge in another direction — Las Vegas, boxing, very much a Scorsese story.”

“Read this book!! A combination of suspense and romance with each character having a troubled past and all complement each other. I could not put it down! I loved that each chapter had a time-stamp so you can imagine how the events are taking place at a time of the day. Excellent read, excellent book and a job well done at the end!!!”

“This book was captivating from beginning to end. Action packed and fast paced. Can’t help wondering what this would look like brought to life on the big screen or TV?? Hope it’s not long! Great contemporary read!”

“Fast-paced, literary thriller, that will have you hooked from the first page. Never thought I’d find a book about boxing to be so thoroughly absorbing. Literally, could not put it down! Can’t wait to see what David Albertyn has in store for us next.”

“Highly Recommended!! This book takes an unusual cast of characters, and turns them into three dimensional people we care about – with their troubled pasts, unsettled present, and uncertain futures. It is a clever melding of story lines that keeps the reader engaged and always just one step behind, never quite anticipating the next surprising plot turn!”